I decided on the title of this post a few days ago when I took the picture and I’ve had this song stuck in my head ever since. The original of the song was by Dusty Springfield and was released the year I was born but I became aware of the song in the 80’s when Tracey Ullman did an album of covers, including this one. My mum played that album over and over. I remember that my Dad had rigged up a second set of speakers from the stereo into the dining room and kitchen and on Sundays as my Mum was cooking dinner she would play this album as she cooked and cleaned up the house. A lot of the songs on the album where done in a very upbeat fashion, even the saddest songs on the album and we’d sing along and dance. I was at the age where everything was about to change in terms of stress and unhappiness in my life,  but,  at that point I didn’t have a care in the world and it is one of my happiest memories of my childhood.

The Epiphany has an amazing round going on and today I’m featuring the items from the Dead Dollz gacha! This came at the perfect time for me as I am decorating my new house and was on the look out for items to decorate my bedroom. I wanted girl stuffs but not cute fluffy stuff! I wanted stuff that screamed “I’m a woman!” as opposed to “I’m a Princess” and this set really does that I think.  The clothing items are Maitreya Lara exclusive and there are 4 different bra and panties sets, stockings and a RARE corset/basque with a colour change hud to match up to the underwear. The decor items look amazing too and look very pretty on the dressing table or vanity…or scattered all over the floor if you’re me! 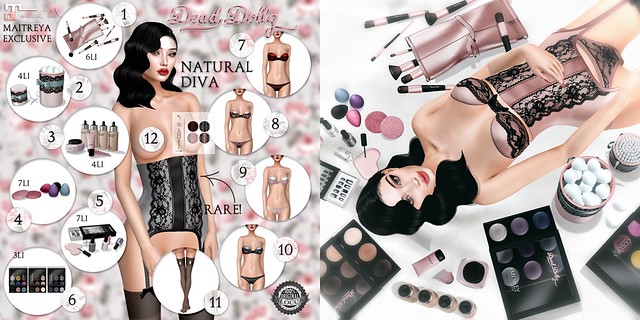 {what next} Sleep Tight Floor Print