I am not black. I am not American. But, I cried when I watched the video of George Floyd being murdered in the street in Minneapolis by a white police officer. Aided and abetted by at least three of his colleagues he callously snuffed the life of George while he begged for the most basic human right….air. I have never witnessed anything as callous, gut-wrenching, appalling and sickening in my life. Right to the end George was respectful saying “Please! I can’t breath” and calling for his Momma.
I was reticent to comment on this subject, to be honest because, as I said, I am not black and I am not American. But, this is a race issue on more than one level. It’s a human race issue and I am a member of the human race. Every single person on the planet should be outraged. Humanity was lacking in everyone involved in that young man’s death.  I fear for humanity.
I can’t even begin to imagine what it’s like to live as a black person in America. I can’t imagine living in that kind of fear. I can’t imagine how scared mothers of black children must be…every…single…day. I can’t imagine because I’m white, living in a middle class predominately white town. I have white privilege and that translates as my life has always mattered in the eyes of some, who don’t believe black peoples lives matter as much. The way George Floyd was murdered, on video, by someone who nonchalantly thought it didn’t matter is why Black Lives Matter is important.  We need to use that privilege to speak out until no mother has to worry differently for their son or daughter based on the colour of their skin…until the day comes when a black person and a white person both FEEL the same when they get pulled over by the police…SAFE.
You can pick up this Black Lives Matter Tee from Blueberry  at this location.  There’s a male version too, which I believe is made by Mossu. Check out the sim too. It’s important! 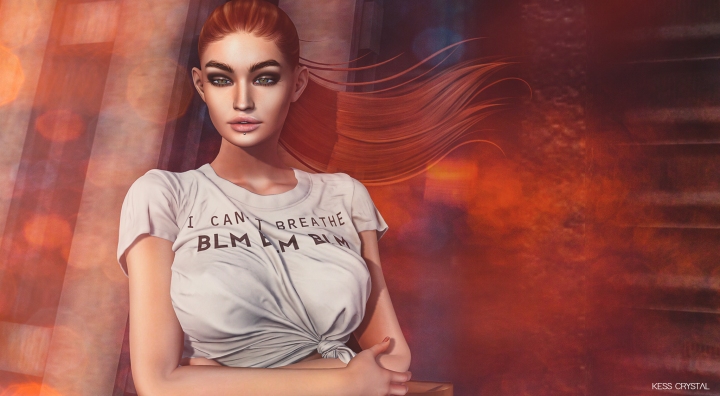