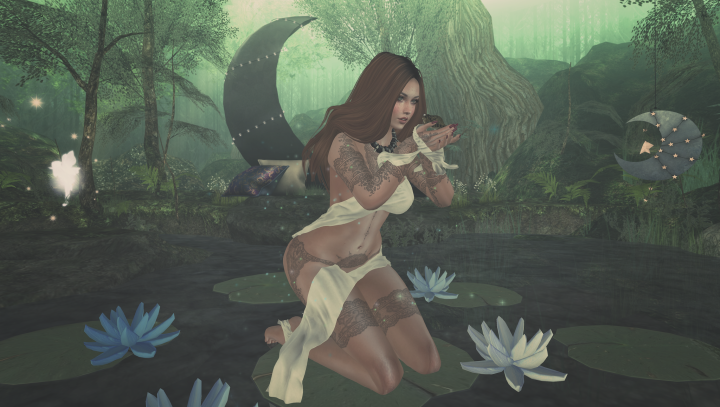 The phrase ‘you gotta kiss a lot of frogs’ before you find the prince never much appealed to me in real life let alone in SL. In SL you’re expected to go a lot further than kissing before your prince will reveal himself and that doesn’t much appeal to me either.  I’m not judging. If it works for you then go for it. I see a lot of ‘shaming’ of people going on in SL by people who do judge…people who often live in glass houses themselves and should probably not. That’s often why they do it anonymously.  Those people really need to wind their necks in too. How someone, male or female, chooses to use their body and mind in SL is up to them and as long as they aren’t hurting anyone else then it’s no one else’s business. Of course, these people that are most vocal usually know very little about what has really happened between two people. As a friend of mine said recently ‘relationships work best when no one knows your business’

There are lots of events about to start on the grid today and over the next few days but Indie Teepee is still going strong. This whole look and set up was aimed around this pose set from LW Poses. The set includes the pose, the lily pads and flowers and the attachable frog.  I’m wearing the White Widow release for The Epiphany Gacha event. There are several commons in white, henna and black that feature smaller tattoos for different parts of the body but the rares are full body tattoos like the one I’m wearing.